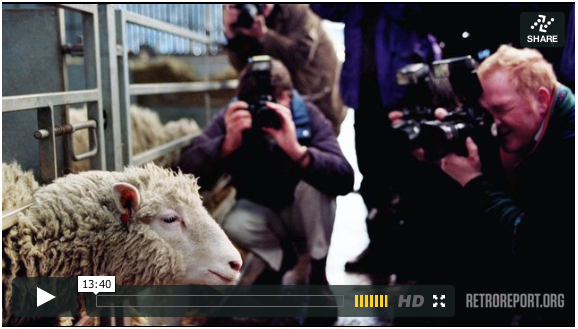 It was a scientific feat for the ages. A result so exciting and scary, that one reporter wondered , “Should we be applauding a mind-boggling scientific breakthrough or be nervous about where it might lead us?”

February 1997. Scientists in Scotland succeeded where no man had gone before. A mammal was cloned. Sheep number 6LL3. Her name was Dolly.

Dolly became an overnight sensation and fears of counting the same sheep over and over again – or, worse, the same cloned human being – took hold. But those concerns – some moral, and some the stuff of science fiction movies – soon got in the way of other promising science. Science that might have saved lives.

How did Dolly spin out of control? And to what extent did our fears at the time come true?

Matthew Spolar is a producer at Retro Report, the non-profit news and documentary group that follows important events after the headlines fade. Their new video is “Dolly the Sheep.”