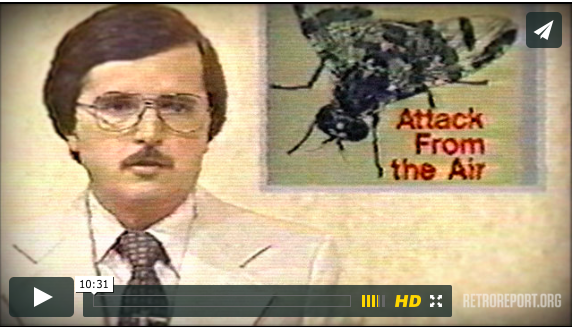 Remember the medfly? All bugs are pesky, of course, but the Mediterrean Fruit Fly might have been the peskiest. And a little bit scary. The threat was imminent: A tiny creature was going to ruin California’s agricultural industry.

But the battle of the Medfly soon became a battle over pesticides – mainly, one called Malathion – and the widespread spraying of California’s towns and cities – even Los Angeles.

What happened to the medfly? More importantly perhaps, with widespread spraying of pesticides to fight the pest, why did our public officials, news media and even the public get so concerned about this crisis? Which side of the science was right?

Josh Fisher is a producer at Retro Report, the non-profit news and documentary group that follows important events after the headlines fade. Their new video is “Fly Wars: Battling the Medfly.”