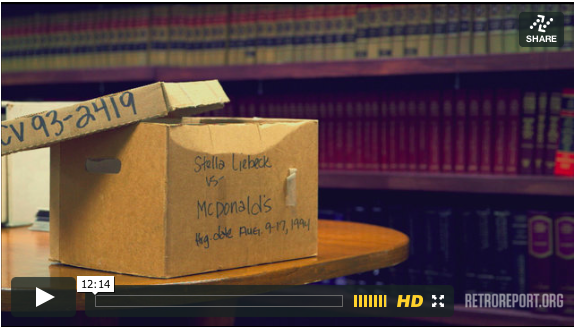 It was the poster child for a legal system gone haywire. In 1994, an Albuquerque, NM jury gave $2.9 million dollars to a local grandmother who spilled McDonald’s coffee in her lap.

Within days, the story went global: New York. Germany. France. And then, Capitol Hill, where it became a political centerpiece for Newt Gingrich’s Contract with America and the Common Sense Legal Reform Act.

But as this story grew, did it become more fiction than fact? What if this cause célèbre of a case got that way, because in the oversimplification of storytelling and lawmaking, people didn’t understand what really happened?

Bonnie Bertram is a producer at Retro Report, the non-profit news and documentary group that follows important news events after the headlines fade. Their new video is “Liebeck v. McDonald’s: The Big Burn.”