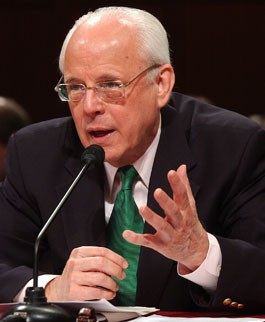 In little more than a week, we’ll mark 40 years since one of the darkest days in American politics, government and culture – 40 years since President Richard Nixon resigned our nation’s highest office.

Much has been written and reviewed about Watergate. So much that there would seem little room for anything new.

John Dean played a key role in the Watergate tale.  He served as counsel to the President during that time, and while he did not know of the break-in when it occurred nor of White House involvement for many months later, he found himself – perhaps unwittingly – becoming a central player in what he calls The Nixon Defense.

In the last years, Dean listened to and transcribed the primary Watergate source material: Nixon’s own White House recordings. Incredibly, many of these conversations have never been transcribed, cataloged and examined. That’s what Dean has done, and in the process – he says – connected the dots between what we believe about Watergate and what actually occurred. He has documented it all in a new book: “The Nixon Defense: What He Knew and When He Knew It.”