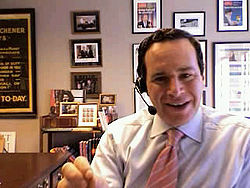 As both parties kick off the 2014 political season – and Midterm primaries and Elections creep closer on the calendar – both parties face questions. For Democrats: How to defend and, if they can, advance Obamacare, minimum wage and other initiatives. For Republicans, the big question also seems to be a basic one: Can’t they all just get along?

The forced government shutdown, various election battles, competing strategies around health care and more have left party members and party watchers wondering what comes next. Many ask how the gap created between the Tea Party wing and the so-called Established branch will affect Republicans’ ability to drive policy and win campaigns.

One person who spends time considering the policy and the politics: David Frum, contributing editor at The Daily Beast, CNN contributor, former special assistant and speechwriter for President George W. Bush, and author of several books, including most-recently “Why Romney Lost (And What The GOP Can Do About It).”